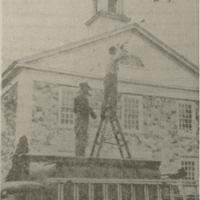 n 1891, the Royal Power Company received a franchise from the Town to serve electricity. The company built a small steam electric generating plant on East 4th Street by Happy Creek and went into operation around 1892, serving a few customers and Town street lights.In 1893, the company went bankrupt and went out of business. In 1894, the Town Council authorized a referendum to borrow $8,000.00 to buy the power plant and lines. So, in 1894, the Town of Front Royal starting supplying electricity to Town citizens.

In 1904, the Town purchased the Kenner's Dam and started construction of a hydro generator plant to supplement the steam plant to accommodate the power needs for the Town. The Riverton Hydro Plant served the Town customers until 1930.From 1894 until 1918, the Town of Front Royal was able to produce all their electrical needs. But in 1918, the Town had to supplement their energy requirements from an outside source, which was contracted through the Northern Virginia Power Company. By 1930, the Town was put into a position of establishing a wholesale power contract in some ways similar to the way we have been doing business to date.In 2007, the Town of Front Royal started to acquire generation assets with the buy-in of two (2) coal fired power plants and is currently investigating other renewable energies such as hydro, wind and biomass. Today, the Town serves almost 8,000 customers in Town and in the county along Browntown Road.